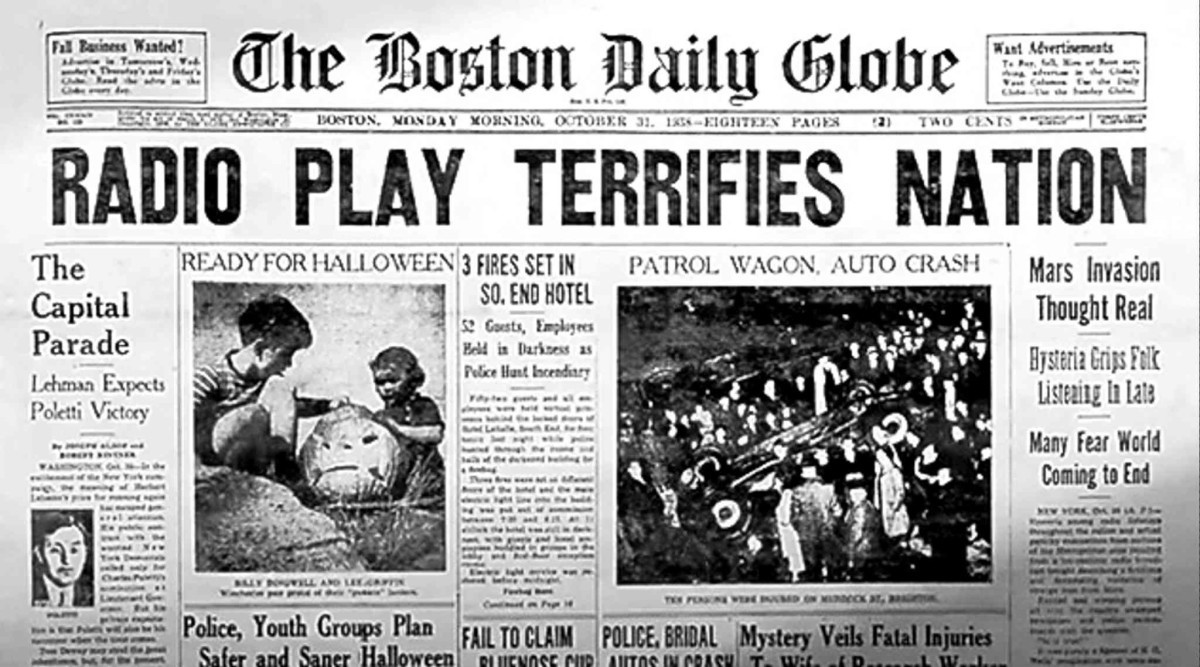 News / Other Insights / War of the Worlds – The Enemy is Us?

War of the Worlds - The Enemy is Us?

On the evening of October 30th, 1938, 23-year-old Orson Welles achieved infamy with his broadcast of H.G. Wells’ science fiction novel War of the Worlds. The story – which was serialized in the late 1890s before publication as a novel - told of a brutal Martian invasion and occupation of Earth and was styled as a first-person factual account.

The novel lent itself to a sense of realism and a reporting-like format that Welles complemented with “breaking news”-style alerts on the devastation of advancing Martian armies with their heat-ray guns. Actors gave tortured voice to the characters in the story, while descriptions of the catastrophe were underscored by explosions and sound effects that were convincing to an audience for whom radio broadcast was less than two decades old. In short, it was radio drama styled as a news broadcast.

The performance reportedly caused mass hysteria among radio listeners unable to distinguish performance from reality - the next day, horrific newspaper headlines told of suicides and the emptying of cities. Days later, with the dust settling and the alleged hysteria calmed, still more headlines proliferated - these ones focused on assigning blame to Columbia Broadcasting and Welles, excoriating the company and performers as having deliberately misled and terrorized audiences through unchecked use of a dangerous medium. More to the Story: The Incident vs. the Myths of the Incident

With the 75th anniversary of the incident, 2013 saw renewed interest in the War of the Worlds broadcast. As part of its American Experience series, PBS released a documentary recalling that “upwards of a million people, [were] convinced, if only briefly, that the United States was being laid waste by alien invaders.” NPR unrolled a “War of the Worlds” Radiolab episode.

The surge of interest also prompted a more critical examination of the actual magnitude of the panic Welles’ experiment allegedly caused. “There’s only one problem,” read a Slate article entitled “The Myth of the War of the Worlds Panic.” “The supposed panic was so tiny as to be practically immeasurable on the night of the broadcast. Despite repeated assertions to the contrary in the PBS and NPR programs, almost nobody was fooled by Welles’ broadcast.”

Often-forgotten facts of the story are that Orson Welles opened it with a clear introduction referencing H.G. Wells’ story, and the performance occurred on a program called The Mercury Theatre on the Air. It was never intended as a fake broadcast or offered as a real broadcast. Confronted with those points, however, newspapers speculated that many listeners had dial-surfed during the musical interlude of a more popular program, landing on Welles’ broadcast after the introduction. There was little evidence to support any of the newspapers’ claims – even less about the news of suicides and pandemonium that they reported on in the aftermath of the alleged panic.

In hindsight, the origination of the War of the Worlds myth is easy enough to explain – it boils down to competition, and the utility of fake news to discredit competition.

In 1938, the animosity between radio and print media was palpable and at its height. Back in 1920, the first commercial radio broadcast had kicked off the radio craze, which had grown into a Golden Age at the expense of print media. The 1930s saw furious competition emerge between the incumbent newspaper empires and the upstart radio industry, as publishers made desperate and futile attempts block the transmission of news by radio. The depleted print industry was motivated to gamble on anything that could damage radio, and War of the Worlds provided a golden opportunity to hit back.

Naturally the accusations against Welles and his affiliates thrived and spread as newspapers hammered them, but eventually that campaign ceased and the facts were available for inspection. Somehow though - even eighty years later - there has been little balance achieved in the perspective on the incident. Why was this myth allowed to persist and grow despite ample and straightforward evidence against it? One argument suggests the myth gained authority simply due to its own popularity.

The Enemy is Us?

The omnipresence of cell phones and the instantaneousness of communication today means that a real-time mass-panic hoax would be difficult to get off the ground. But technology – however powerful – is limited in its capacity to save our grip on reality, especially when the mistruths are more subtle than an alien invasion. And most are.

We’ve noted before that today, 2/3 of US adults surveyed report getting their news from social media websites, which are increasingly both relied on and questioned as reliable and trustworthy distribution platforms. The quality of the reporting that underlies information offered as news is generally unknowable to the consumer, and we are consuming that information in ever-greater quantities.

A group of data scientists at MIT recently published in Science magazine the findings of the largest-ever study of news circulated via social media. The study examined every major English-language news story in the history of Twitter. The data set comprised 126,000 verified true or false stories, tweeted around 4.5 million times by ~3 million users over the course of a decade. According to the abstract, the study “classified news as true or false using information from six independent fact-checking organizations that exhibited 95 to 98% agreement on the classifications.” The complexity and rigor of the study is summarized well in “The Grim Conclusions of the Largest-Ever Study of Fake News,” an article from the Atlantic’s Robinson Meyer.

Ultimately, the study found that truth simply cannot compete with hoax and rumor. Fake news and false rumors travel faster, reach more people and penetrate deeper into the social network than verifiable stories – “in all categories of information, and the effects were more pronounced for false political news than for false news about terrorism, natural disasters, science, urban legends, or financial information” (again quoting the abstract).

Finally, one focus of the study was the role of technology – “robots” – in the proliferation of fake news, and it concluded that bots accelerate the dissemination of real news and fake news at essentially the same pace. Technology is, after all, wielded by humans who have shown tendencies to commit even more stubbornly to facts and interpretations when they are challenged, and sometimes simply because they are challenged. It’s easy to think we are at the mercy of the technologies we rely on, but this study suggests otherwise - thus we are not off the hook.

In 1938 Editor & Publisher, the leading trade publication for the print media industry, offered this ominous opinion in response to the War of the Worlds broadcast incident, lending its voice (for obvious reasons) to the anti-radio campaign.

We do note the irony in quoting a warning from an infamous fake news campaign, but nonetheless it frames very well the issues and concerns that arise from today's rate of information flow in the absence of accountability.

The war between truth and falsehood is timeless and unceasing, although the brutality of the war seems to wax and wane through different periods. In today’s environment, that war seems to be raging - it is ugly and we are constantly confronted with it. Extraordinary times call for circumspection when it comes to our sources and we must learn to hold our opinions lightly. Our “better nature” may go against our own instincts, but it’s part of our responsibility to the truth.